If you don't know where to start, start here! Don't be afraid to ask questions.

Really enjoying your thread, many similar thoughts regarding the psychology. Not as far along with Forex but attempting to learn, been focusing on stocks with TRO's BZ & Cows. Your intro hit it dead on - the amount of time and talent people on Kreslik.com are willing to share is amazing, something i've not found elsewhere. Looking forward to following your continued growth & success. And thanks for the informative links!

No Doubt Tripken. Glad you like. I am trying to get better, and whoever can ride that wave as well by seeing what I am going through, [s]come on down please.[/s] Get in the water, don't worry, I don't plan on walking the plank!!

Going back to your post at 10.09pm yesterday talking about the BuyZone and the zlines. I like both, plus the Semafors.

I got the idea reading about rats ant TRO's suggestion to trade green or red. If it works for rats, then why won't it work for the BuyZone? I thought.

Forgive me I've forgotten what time frame and how often do you enter BuyZone trades? If you haven't already, be sure to study the indi TRO2009_WICK_COUNT_UI , I think it is among the donationals and Idare say, worth its weight in BuyZone Gold.

Buy Zone on H4 Candles. NY time EST: 7P-11P, 7A-11A, 11A-3P. In previous post, I had made a distinction to trade EURJPY for certain candles and GBPUSD for others. This previous week I followed mainly EURJPY for all my periods, so now I feel confident to follow both pairs at the above times. I know it was probably obvious that those two pairs could be traded most anytimes, but I just had to see it for myself, real time.

I would ideally trade the 3A-7A candle if I am awake.

The only weird thing I feel now is that before the Daylight Savings times, when the US had their 10A economic releases, it was reflected in its own 10A-2P candle. Now that Daylight Savings time is (off?), the US 10A report is now included with three hours of previous data now that it is swallowed up by the 7A-11A candle. Not that it may mean anything significant, but I personally feel slightly uncomfortable about that fact.

How many entries, I honestly couldn't give you a solid answer on that. Too many conflicting ideas as I trade to stick to one set of entry guideline. (lack of discipline, perhaps.)

But I'm working on it.

I think I'm using 9pips on each side though. Well, that was the last one I felt comfortable with, I'm considering different entry criteria based around the start of H4 candles though.
It'll show up in one of my posts sometime soon.
**Krane catches Tyger** !>I'm here to chew bubble gum and make major pips...and I'm all out of bubble gum.<!
Top

Being in two places at one time

What am I to do?? Maybe I will bring my mask along and take a few pictures?? Awkward

So if you happen to be there and you see the mask, it is me.
**Krane catches Tyger** !>I'm here to chew bubble gum and make major pips...and I'm all out of bubble gum.<!
Top

I'm drawing a line now, re-making a conscious decision to avoid last weeks fiasco. My spread on both EURJPY & GBPUSD is @3pips. (FXCM is not fixed spread.)

I'll give myself 14pip stoploss, spread plus 11 pips of movement.
**Krane catches Tyger** !>I'm here to chew bubble gum and make major pips...and I'm all out of bubble gum.<!
Top

Re: Stop Loss set in Stone

TygerKrane wrote:I'm drawing a line now, re-making a conscious decision to avoid last weeks fiasco. My spread on both EURJPY & GBPUSD is @3pips. (FXCM is not fixed spread.)

I'll give myself 14pip stoploss, spread plus 11 pips of movement.

So maybe my Buy Zone should just be 14pips, thus stopping me out if price crosses the candle open.

Ok, so not saying I'll actually do that, but the thought came across me while I happen to be by my computer, so i posted up my thoughts.
**Krane catches Tyger** !>I'm here to chew bubble gum and make major pips...and I'm all out of bubble gum.<!
Top
Please add www.kreslik.com to your ad blocker white list.
Thank you for your support.

I've changed up my MT4 setup that I posted on the first page of this thread.

I have a thing for the level sensor tool and have been tweaking it as per our discussion here: Level Sensor Help??

I've added Blubb's Custom Candle (I guess a different version than the one Mighty One is currently using.) It makes it WAYYY easier to correlate the action on the M30 to the H4.

So maybe using the H4 level sensor as a Buy Zone when price approaches. Just trying to find a way to hold on to longer moves as H4 charts seem to suggest.

So here is the attachment, it reflects Friday 4/23 afternoon:
{Note: the H4 level sensor line appeared sometime before the end of Tue, 4/20

(sorry, HAD to do that one, lol).
--I used the crosshair tool on both charts to line up 124.64 and further show my 'main focus' price action (brown circle).
--The orange circle occurs during the 3P-7P [NY EST] candle, so I probably would not trade it due to low volume of all the trading sessions closed. But then again, if you
have an edge, you're supposed to trade it through and through, I think they say, sooo....

hmm, maybe throwing just one trade in won't hurt the P/L too much if I'm wrong...
--Not certain how much attention I would pay to M30 level sensor, just b/c the level sensor happens on the H4 doesn't necessarily mean there will be a matching one on the M30. AND
DEFINITELY don't expect to get a nice pair together like in this pic.}

<I also take this screenshot once a day, so if you want to see how Tue, Wed, Thu played out, just let me know; I might not mark it up all nicely, but still...>

<hope the markup works for you guys> 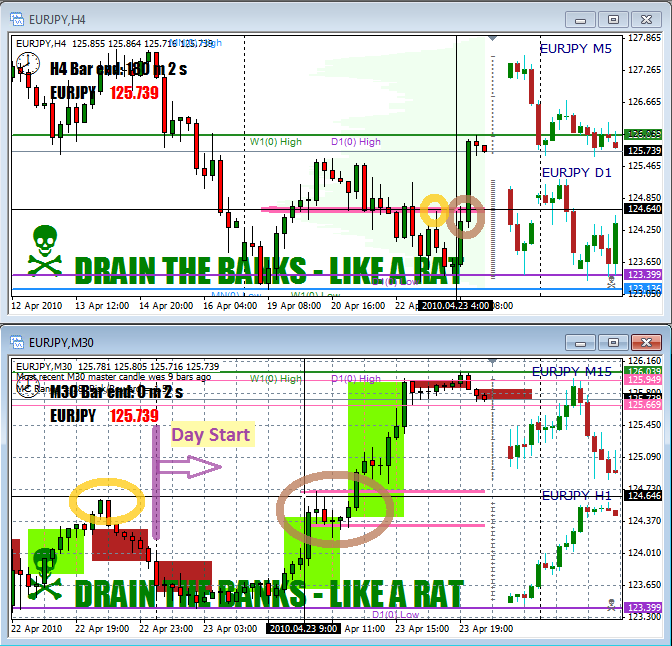 Just for the hell of it, here is GBPUSD on Fri 4/23. Unlike the EURJPY example, the H4 level sensor was only formed sometime before the close of Thursday, so this level has only been around for a little more than a trading day, maybe a day and a half, who knows? All I know is that it wasn't there when Thursday opened.

<I am putting up Thursday, as well as Friday. But like I said, I don't know what time Thur it formed.>
<Also note that some of the trades would have opened during the 3P-7P candle, the last H4 candle of Thu.> 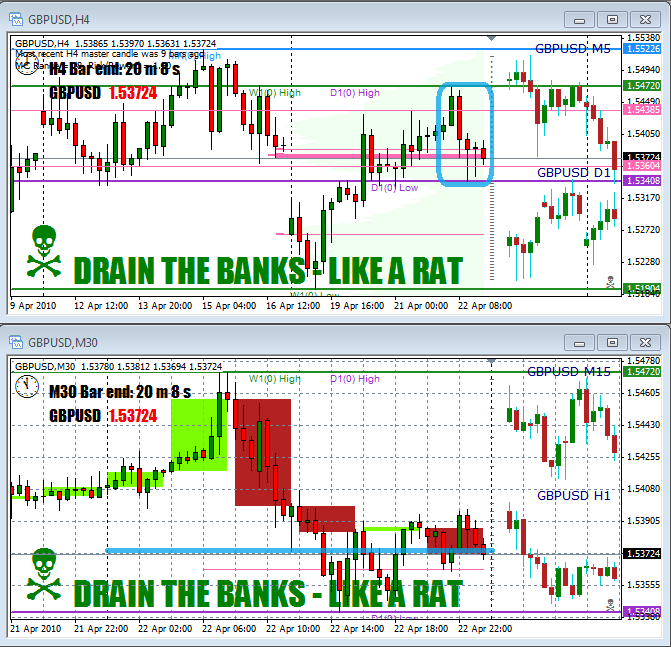 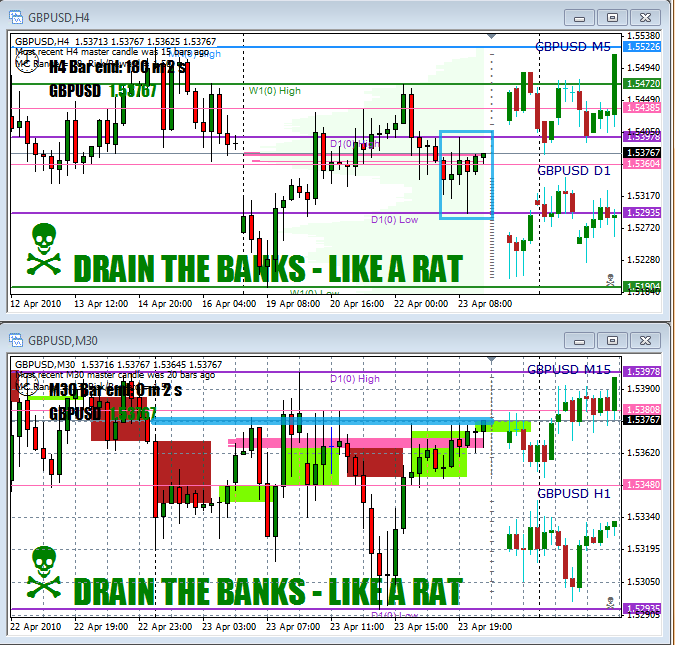 Considering all the risk taking I've done already in my Forex journey; I've somehow been super-intimidated by having an account with hedging. But looking at my screenshot charts like these (I have tons), and starting to understand that a hedge puts a 'pause' on your profit, while you let that potential energy build up for the next kinetic move in your direction (at 60 degrees hopefully, LOL), MAYBE I should transfer my account to hedging...

I suppose using hedging makes it easier to add to your positions?? [Responses especially to this, please, welcomed]

Furthermore, if you put on a hedge equal in lot size to your original position, no matter how far price goes after that, the most you could lose by closing out both at the same time is the cost of the spread, right?? {your profit at the time you started the hedge, minus the spread cost of opening up the hedge position(s)?} [Responses especially to this, please, welcomed also]
**Krane catches Tyger** !>I'm here to chew bubble gum and make major pips...and I'm all out of bubble gum.<!
Top

If you Buy on a H1 chart and then you scalp by selling on M5, you are hedging. It's not really groundbreaking.

Personnaly I only hedge while entering a trade, to be safe before news high volatility. I dont hedge as some kind of exit strategy like MO do.

Still, hedging in the same TF and same "trend" like he does is about taking advantages of triggers. A trader cannot know where price is going ALL THE TIME. But he can recognize a pattern, at a certain precise point, and know he has a good probability (51% at least) to be right. So if you are positive in a long trade, and see a sell trigger, it would make sense not to dismiss it. Perhaps we can see it as an entire different trade.

PS: For the second question, i'll do my badboy and tell you to go try it in demo

PS: For the second question, i'll do my badboy and tell you to go try it in demo

Of course, of course!! Man, I was writing posts ALL afternoon yesterday, by the time I got to the hedging point (the above question), my mind was tired and didn't feel like doing anymore thinking.

So I guess I'll have a new set of posts to add to my thread soon...

Let's see if I can 'expose' anything more on hedging.

And this will give me a great opportunity to overcome my fear at the same time, thanks for the great answer, newschool.