Did you watch the videos on prochargedmopars signature? About supply and demand? If not, do it NOW.

Prochargedmopar changed his signature, so if anyone is wondering what that video is, here it is:
Sam Seiden, Supply and Demand Trading with Mechanical Indicators and Oscillators in the Forex Market

but this one is good as well:
Sam Seiden, Multiple Low Risk Forex Entries with Support and Resistance
**Krane catches Tyger** !>I'm here to chew bubble gum and make major pips...and I'm all out of bubble gum.<!
Top
Please add www.kreslik.com to your ad blocker white list.
Thank you for your support.

tyger, noone, still intrested in discussing the level sensor?

Mo never said a Zline is a supply/demand zone, correct.
But since "Momo" creates a Zline in most cases, expecially after a period of "extreme quiety" (Dont remember how mo called it exactly) when price was moving sideways for a bit, with small bodies, that would also be a description of a supply/demand zone, like in the video.

The thought i was pondering:
It is obvious that a supply/demand zone and/or old highs/lows do not expire in terms of time. But with the Level Sensor, that is excactly what is gonna heppen, after the set number of Candles expired, that "Zone" is gone, with the level Sensor not looking at it anymore. Your thought on this?
It's time to kick ass and chew bubble gum. And I'm all out of gum.
Top

The question is: what actually "Level Seonsor" is drawing.

In my understaning, it is market profile,
has nothing to do (at least directly) with supply-demand,
it is just frequency distribution of most frequently traded prices.

Real "Market profile" derives from price-vs-volume information.
Volume is a subject of question in Forex.

Moreover, code of Level Sensor indicator itself is so simple,
if not say "primitive", that I don't
put much trust in it.
Maybe after some adjustments it will give have more value,
but I don't know this for sure, until spend time
playing with it myself, which is not my nearest intention.

If someone could provide some interesting idea,
how Level Sensor could be practically used
in everyday trading, I may be more inclined
to continue with it.
Otherwise - I have thousands of others mq4 indicators
to work with.
Top

always thought level sensor calculates the volume AND price, not just the price alone ??? Im not sure though, good thinking!
It's time to kick ass and chew bubble gum. And I'm all out of gum.
Top

When I had level sensor on my charts, I was using the default settings. I never got around to trying your settings. What I do have tho is 3 weeks worth of screenshots on the H4 and M30 for the EURJPY and GBPUSD. So if I feel the need, I might can flip through and see if I see anything substantial.

I decided to take it off my charts, because on the default settings, it didn't seem that interesting after awhile. I would like to try your settings tho, (the 99% part sounded REAL interesting.) So who knows, maybe I'll check it, but I'm really trying to have nothing on my charts so maybe not??


So I have like 20 screenshots like this, using the default settings: (I tried to take them all at day end around the same time) 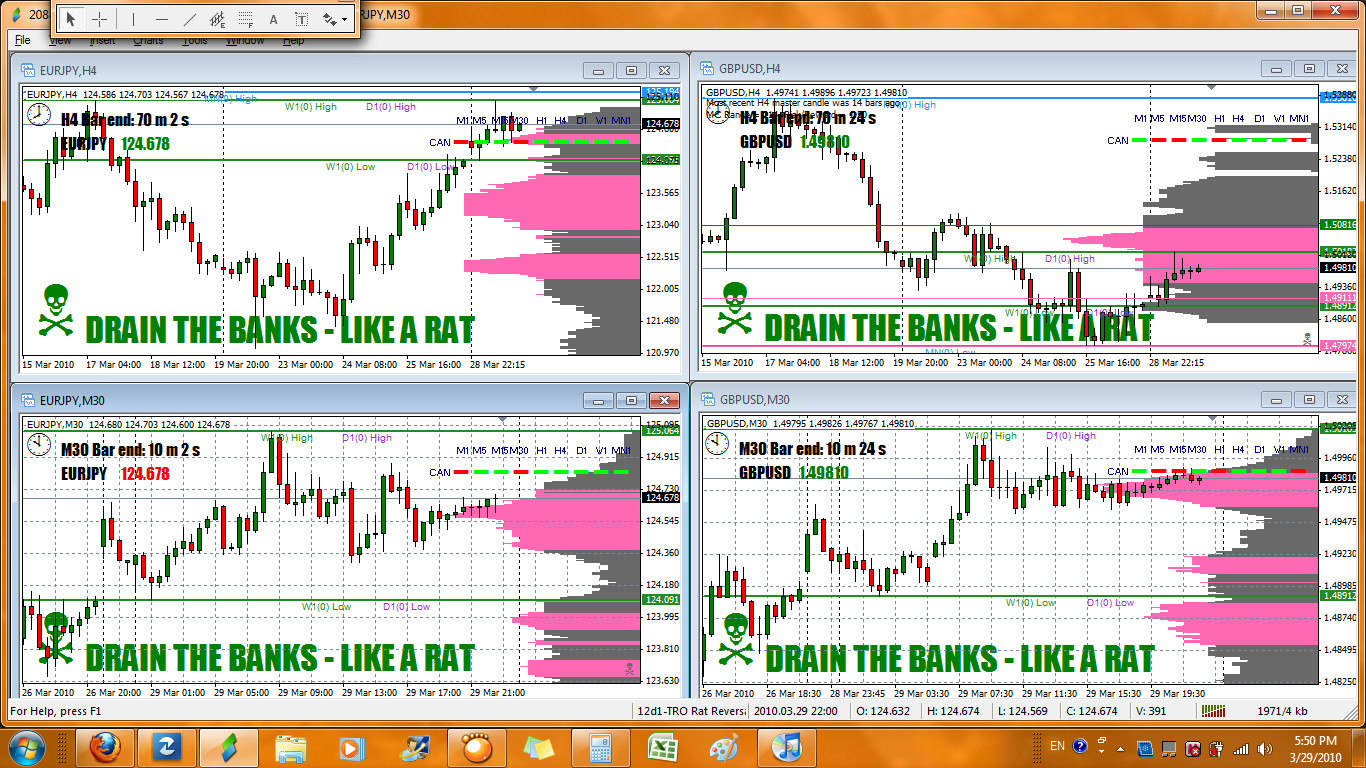 During this time, I observed that Master Candles on the M30 made good areas to pay attention to. (no master candles on this image I uploaded tho.)
Last edited by TygerKrane on Tue Apr 20, 2010 6:28 pm, edited 1 time in total.
**Krane catches Tyger** !>I'm here to chew bubble gum and make major pips...and I'm all out of bubble gum.<!
Top
Please add www.kreslik.com to your ad blocker white list.
Thank you for your support.

noone22 wrote:Otherwise - I have thousands of others mq4 indicators
to work with.

Do you really spend time experimenting with many different indicators? You don't like trying to do it on Price Action alone? or using next-to-nothing on your charts?
**Krane catches Tyger** !>I'm here to chew bubble gum and make major pips...and I'm all out of bubble gum.<!
Top

Ok, so what the hell, I'll throw up your recommended settings.
How does this look, check my settings please? (I chose 'Honeydew' over 'White' for the grey bars

) So I guess I'll be taking screenshots of this for the next 2, 3 weeks.

Or maybe you could put up pic of your setup. Also, do you prefer to have your candles running through the sensor, like in this pic, or do you keep it more to the side?? 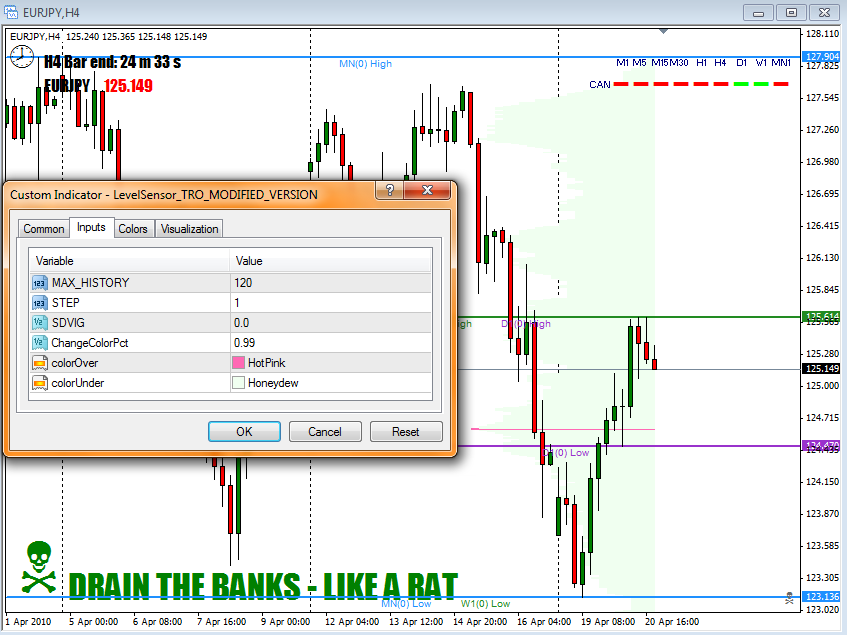 Ok, so here is what I will be tracking for the next few:
(and what do you know M30 Master Candle on GBPUSD; Unfortunately I tend not to touch GBPUSD until London open and later.)
Also, I changed the 'ChangeColorPct' to .95; .99 gave me a line too thin to see when my charts are small like below. They were showing up
like the M30 GBPUSD, thin or non-existent. But I will leave that one at .95 as well.

In comparison to the default settings which I was originally posting in this thread, this looks more like drawing a line in the sand and daring the price to cross. 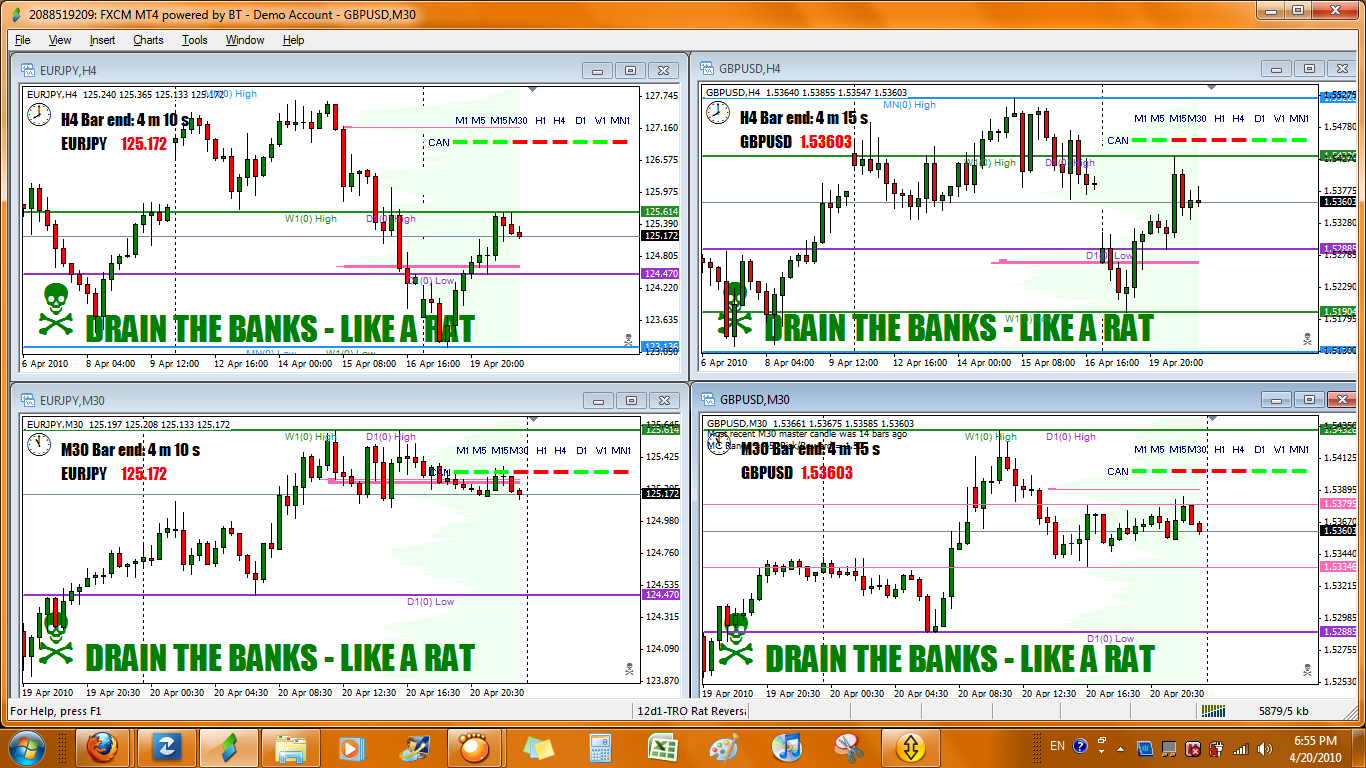 Just my thoughts and a chart or two on the subject:

So, as I was saying on my thread, I've been considering using the Level Sensor as a Buy Zone (because of the way it calculates price congestion areas.)

Well, this was kind of a big and busy week for me, a lot of observations and realizations and thinking. This is my first chance to post about this, it reflects what I observed 16 hours
after market open, Sunday, May 2. (on the EURJPY)

The H4 Level Sensor was at 125.46 and had been there 4 or 5 days, right from the open of Sunday, if I had used it as BZ, I could've hit at least two days worth of profit target: 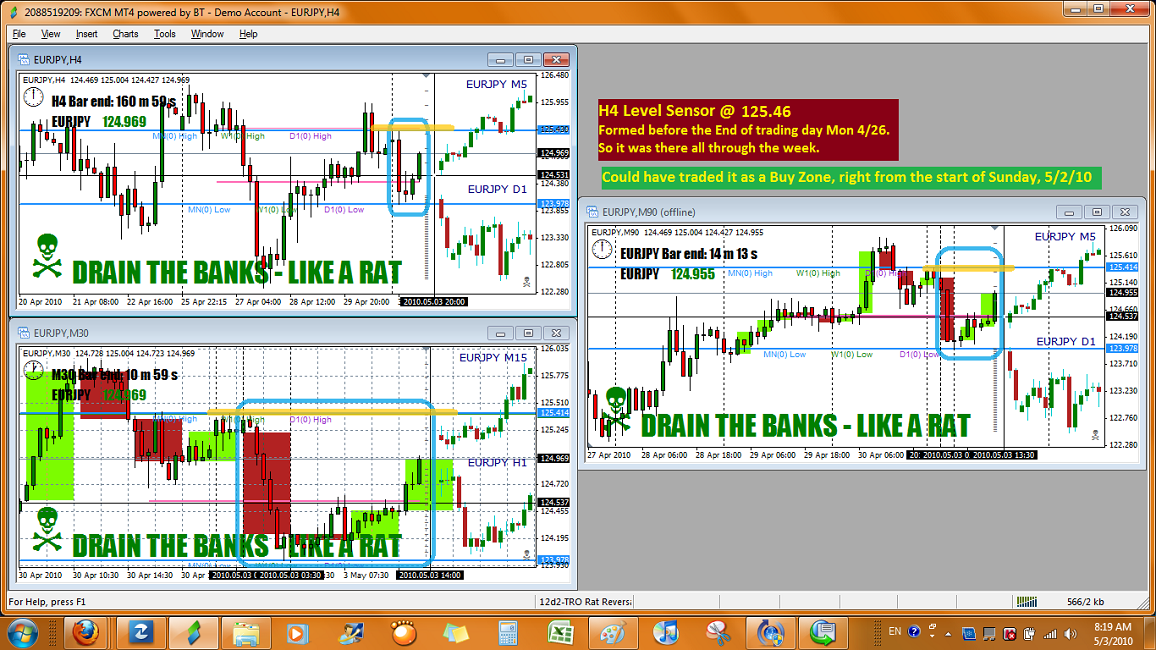 If I missed that entry point and wasn't sure what direction to take my trades, I could've used the M90 Level Sensor at 124.54, it had formed at least the Friday (1 day) before,
on 4/30/10. To use the congestion on the M90 chart as a starting point.

(Note:
-I use the crosshair tool on the charts to approximate where the level sensor is.
-In both pictures, the Level Sensor in the H4 chart below 124.54; that did NOT form until the 7A EST candle hit its low during the first 30 mins of 7A [look at the M30 chart, the low of
the first M30 candle within the last H4 Custom Candle.] Therefore during real time trading, the only two Level Sensors available were the 125.46 & 124.54.)
**Krane catches Tyger** !>I'm here to chew bubble gum and make major pips...and I'm all out of bubble gum.<!
Top
Please add www.kreslik.com to your ad blocker white list.
Thank you for your support.
Post Reply
24 posts